Shaun Johnson has become New Zealand’s leading Test point-scorer as the Kiwis’ ran riot in a 74-6 rout of Scotland at Christchurch Stadium on Saturday afternoon.

The Kiwis amassed a staggering 14 tries as they blew Scotland away in a performance that will leave the rest of the competition weary of having to encounter a side now beaming with confidence. The three tries to both Peta Hiku and Te Maire Martin will hold prominence at the top of the scoreboard, but it was the clinical, across-the-park showing of the entire team which stood out.

It was a 28-point shut-out in the opening 40 minutes and after the break the free-flowing and ad-lib football continued as New Zealand took advantage of the glorious conditions and dry track.

Johnson scored 22 points from a try and nine goals, adding to his 14-point haul in the 38-8 victory over Samoa, giving him an incredible 36 already for the tournament. The 27-year-old took his Test points tally to 175 in his 23 Test/World Cup appearances, passing Matthew Ridge’s mark of 168 points.

The Kiwis had 196 total runs compared to Scotland’s 84. A total of 2079 run metres to the Bravehearts’ 636. And 31 offloads to the Scot’s six. It was a complete overpowering.

Right from the start the Kiwis showed they weren’t afraid to throw the ball around and their efforts were rewarded with three tries in the first 15 minutes.

By halftime, their 70 percent share of possession had helped them to half-a-dozen tries – including a Jason Nightingale double – and the lead had extended to 28-0. New Zealand’s approach was personified by Nelson Asofa-Solomona, who threw a casual flick-pass after bumping off several Scottish defenders to set-up Martin for the Kiwis’ fifth try of the day.

Russell Packer scored his first try in a Kiwis jersey three minutes after the break as New Zealand moved to a 34-0 lead. Joseph Tapine was at the forefront of New Zealand’s destructive forward-pack who simply monstered Scotland out of the game.

Tries to Martin and Hiku – their second each of the day – along with one by Dean Whare propelled the margin out to 52 points midway through the second half, as New Zealand showed-off their depth and potential dominance to the rest of the competition.

The win leaves New Zealand ready to take on Tonga next week in what is being billed as one of the matches of the tournament to played in New Zealand, while Scotland will be icing their wounds after a damaging afternoon. 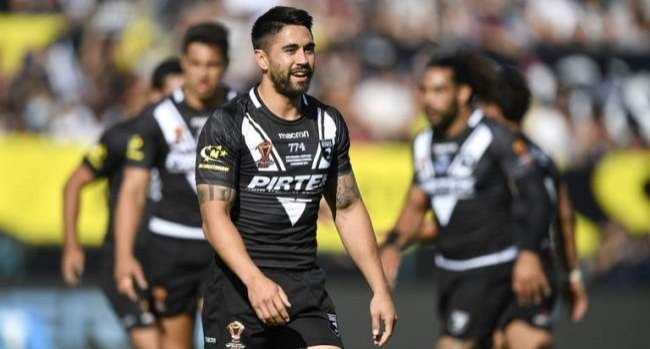