Italy fought off a determined German outfit to ultimately run out convincing winners in the opening match of the European Shield. The Azzuri scored five tries in each half but could not shake off the visitors until the hour mark when Bradford-based second rower Marco Ferrazzano, who was a handful all night, scored the second of his three tries after the Germans were penalised for passing off the ground.

Having closed to within eight points, at 34-26, that incident proved to be the turning point and the visitors were unable to respond as the hosts pulled away. The Italians, who scored from their first possession through Giovanni Franchi, started impressively; going 16-0 up inside ten minutes and building a 28-4 lead with two tries from stand off and skipper Andrew Kaleopa. But they had to withstand an excellent first half fight back when German centre Nico Koch, who also claimed a first half brace, made it 28-14 at the break.

Nicola Facco extended the home lead three minutes into the second half but Halifax trialist Jimmy Keinhorst, Germany’s best on the night, sparked a revival with two well taken tries in eight minutes.

Straight after Ferrazzano’s game turning effort, Facco crossed again with Ferrazzano completing his hat trick in the next set to bring up the half century.

Italian coach Carlo Napolitano was pleased the way his men stood up to the challenge. “We played to our strengths and considering the short preparation time we had, we did very well” he said. “We played  percentage football, a simple game and it worked for us. Dan Wilson went well, as did Marco Ferrazzano. They laid a platform for the local boys, who will have learnt a lot from this match.”

His counterpart Uwe Jansen was equally upbeat about his side’s commitment. “We are learning quickly although some old habits were evident” he commented. “It is very important for us to build our team from local players and we intend to continue to do that from the six German clubs in our domestic league.” 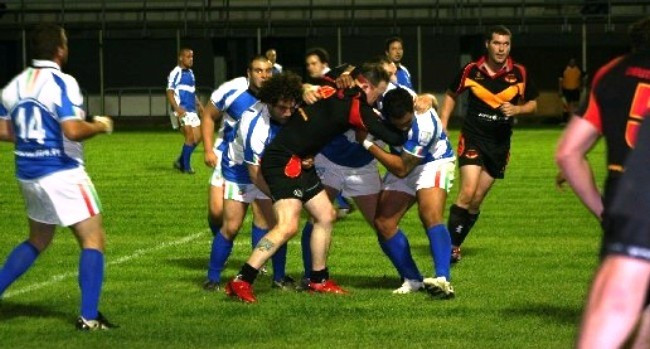