A crowd approaching 1,500 in Rivne, a city new to rugby league, saw Ukraine dominate as they defeated the Czech Republic 46-6 in the first leg of European Championship C, in hot conditions. Star of the show was home-town hero Nikolai Shalaiev, the powerful centre posting two tries in each half; the hosts profiting from a blistering start which saw them score three times in the opening 13 minutes.

UFRL president Artur Martyrosyan said. “It was fantastically organised with the club here, regional government and sponsors. This is the first in Rivne City stadium and it was terrific that their young players excelled. We are very grateful to the Czech side for the manner they played.”

Ukraine skipper Alexandr Skorbach opened the scoring and Shalaiev had the crowd on their feet with two touchdowns soon after, Skorbach missing all the conversions. The Czech’s, who took time to acclimatise after a long journey, rallied and centre Otto Friedl capitalised on some good work inside him, Petr Sedina goaling to narrow the gap to six points. But Andriy Khrusiuk replied soon after and, on the stroke of half time, Mikhail Troiyan crossed; Andriy Shakura goaling both for a 24-6 half time lead.

There was no further score for 24 minutes of the second period as the Czech defence held firm, while they also conceded possession on four occasions when threatening the home line. Around the hour, the visitors also lost the services of Tomas Valenta and Jiri Sluka to injury and Ukraine took advantage. Shakura scored a try to go with his five goals and young star Shalaiev went in twice more, Skorbackh, whose distribution was key in midfield, picking up Ukraine’s ninth try.

Czech Republic skipper Sedina noted: “It took us 19 hours to get here but for long stretches of a very physical game, in difficult conditions, we held them out. We made our mistakes early and that caused us to chase the game. It has been a great experience for our young guys.” 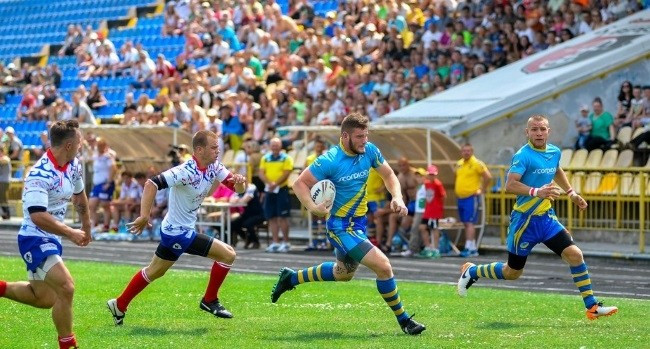