Captain Stuart Littler scored a hat-trick of tries to keep alive Ireland's hopes of a place in the 2008 Rugby League World Cup finals. The Irish ran in 11 tries to set themselves up for a key game with Lebanon at Dewsbury next month. Russia went 10-0 ahead early on and a shock looked on the cards in Carlow. But Damien Blanch also notched a hat-trick while Sean Gleeson (2), Bob Beswick (2) and Paul Handforth went over to seal the easy win.

Ireland coach Andy Kelly admitted that although his side were ultimately comfortable winners, they were certainly not given an easy ride. “Credit to the Russians, the first 20 minutes they really gave us a scare. But our squad did a professional job and stuck to the task” he said. “It will not be easy for Lebanon in Russia next week but it all could be down to the decider at Dewsbury for who qualifies automatically and we are already looking forward to that challenge.”

Full back Oleg Logunov opened the scoring with a smart try in only the second minute, converted by dangerous scrum half Artem Grigoryan. With Andrey Medvedev’s strong charges keeping the Bears on the front foot and Roman Ovchinnikov, back from a spell in Australia, orchestrating the attack to great effect, an excellent set move saw the ball worked with pace from left to right. Victor Nechaev spotted the Irish defence standing flat and his neat chip through was touched down in the corner by Valentin Baskakov to make it 10-0 after barely eight minutes. Ireland worked their way back into the contest; Blanch on the end of an expansive move to touch down in the corner and open their account although Liam Finn was wide with the conversion.

Ireland’s ability to keep the ball alive brought further reward as gaps started to appear in the Russian ranks. A fine jinking run by the outstanding Bob Beswick created space for Sean Gleeson to force his way over out wide, this time Finn making no mistake with the extras to level.

The Russians edged ahead again in the 21st minute when Grigoryan kicked a penalty after the hosts were pulled up for crossing in front of their own posts but then the Irish took control for the remainder of the half to establish a match winning lead. As the visitors tired, Ireland began to find their rhythm, Gleeson powering over from close range and Littler stepping clear for his first touchdown on the half hour. Beswick finished off a fine long range break from Scott Grix who sliced through the cover and just managed to get his off load away as he fell and, right on half time, Blanch powered over between the posts from Paul Handforth’s fine pass. Local player Steve Gibbons showed up well at the start of the second period but the Russians gave themselves a life line when exciting winger Nikolay Zagoskin collected Grigoryan’s cross field kick to sprint clear past some flimsy cover defence.

After pinning the visitors back on their own line, Handforth glided through for a try which he converted and the Irish again ended the half strongly as the battling Russians finally ran out of steam. Littler crossed twice in six minutes to complete his treble, sandwiching an effort by Beswick; Blanch then completing the scoring with his side’s eleventh try. 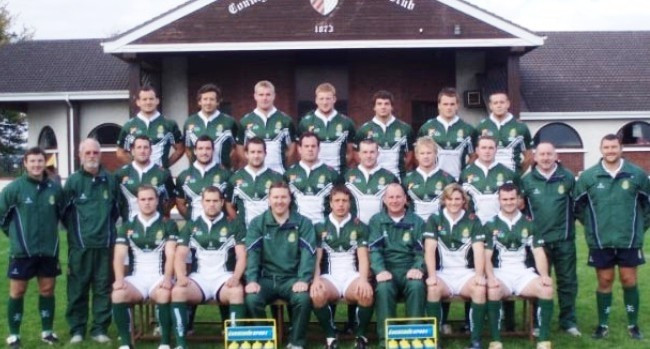