Tony Smith's reign as Great Britain coach overcame a shaky start as his new-look Lions ran in eight tries to get the better of France in Leeds. Britain found themselves 10-4 down after 20 minutes following two Maxime Greseque tries for the French. But the home team rallied to lead 16-10 at half-time thanks to tries for Rob Burrow and Jamie Langley. Second-half tries for Stephen Wild, Paul Sykes, James Roby and Burrow, his second, sealed a comfortable win.

France looked lively from the start in front of a crowd of 12,685 at Headingley Carnegie and were helped when GB debutant Chris Melling misjudged a kick that went out for a 40-20.  David Hodgson was also forced to tackle Sebastian Planas into touch as the visitors sought to make their mark. But Ade Gardner helped settle the home side's nerves with a superb break and inside pass to Hodgson, who sent Danny McGuire over for his fourth try for his country.
McGuire was forced off with concussion and blurred vision after taking a heavy knock in the build-up to France's opening try from Greseque. The Pia player then grabbed his second touchdown four minutes later after GB were let down by some sloppy defending. GB got back on level terms when scrum-half Burrow exchanged passes with captain Adrian Morley to dive over.

Then after Kevin Sinfield, on for the injured McGuire, had kicked the conversion to put the Lions level, Langley came off the bench to crash over. Having led 16-10 at the interval, a more patient approach paid dividends for Britain in the second half.
Sinfield's craft and guile led to Stephen Wild going over for his first GB try. Then Morley, playing his 27th game for the Lions, grabbed his first try for GB, crashing over after 48 minutes. Some great support from Jon Wilkin and Melling sent Burrow in for his second try two minutes later.
The Lions then extended their lead on 55 minutes when Gardner rose highest to grab Sinfield's kick and pass inside to Sykes. Eric Anselme cut the lead by going over from close range but Roby, one of Britain's top performers in last year's Tri-Nations, scored from Andy Lynch's offload. France, who had to overcome early disruption caused by injuries to Constant Villegas and Thomas Bosc, never threw in the towel, dragging Hodgson into touch just short of the line. 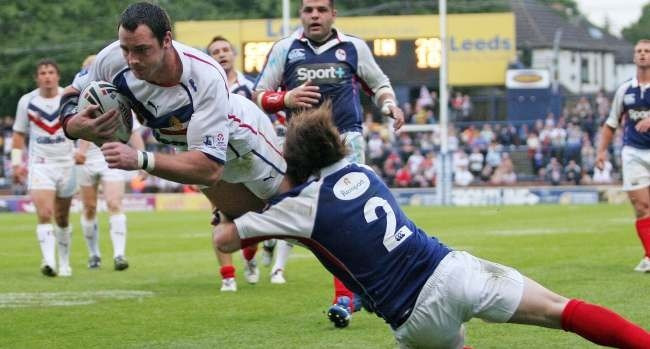