England have staved off a fast-finishing Tongan outfit in controversial fashion at Mt Smart Stadium on Saturday 20-18.

England looked to be easily home and hosed when leading 20-0 with less than 10 minutes on the clock, but Tonga would run in three tries in five minutes in a miraculous end to the game which could have swung the way of the Pacific nation. Andrew Fifita broke through just metres from the line with just seconds to play before it appeared the ball was stripped one-on-one, but the whistle-blowers deemed otherwise without sending the call upstairs.

The first of the three last-gasp tries saw Broncos youngster Tevita Pengai Junior cross seven minutes out from full-time, before Sio Siua Taukeiho converted to reduce the deficit to 20-6. A four-pointer to hooker Siliva Havili followed four minutes later after his side had barnstormed right back into English territory, and Tuimoala Lolohea then barraged his way over less than a minute later off the back of another unstoppable set of six off the kick-off.

But amid the raucous cheer of the Tongan-heavy crowd, the Mate Ma’a would fall agonisingly short.

It means England have secured a World Cup Final berth for the first time since 1995 and are set to meet Australia next Saturday.

England appeared rushed by the highly passionate Tongans in the opening exchanges of the game, both halfback Luke Gale and five-eighth Kevin Brown reeling off ugly kicks.

But the English would be first to impact on the scoreboard after a Gareth Widdop line-break had marched them into Tongan territory. It would see winger Jermaine McGillvary cross in the 10th minute to ice a slick passage of right-edge passes and claim his seventh try of the tournament, before Widdop added the extras to make things 6-0.

An exhilarating passage of play saw Tonga then come tantalisingly close to crossing for their first points moments later, after a 70-metre up-field march streaked with a series of inventive offloads. But Michael Jennings was deemed to have thrown a forward pass while sprawling towards the white line, and a deafening sea of the Mate Ma’a in the crowd made their thoughts clear.

The English then rubbed salt into fresh Tongan wounds off the back of a metre-crunching set of six, Widdop crashing over and converting 16 minutes in to extend his side’s lead to 12-0.

Wayne Bennett’s men enjoyed a wealth of possession on Tonga’s line late in the opening half, but a spirted defence would ensure scores remained 12-0 at the break. Widdop banged over a penalty goal 49 minutes in, to hand England a 14-0 buffer and they continued in their push to meet Australia when they scored off the back of a forced goal-line drop-out later in the half.

It saw Wigan Warriors flyer John Bateman collect a Widdop short ball on the left edge in the 67th minute, before the Dragons playmaker again made no mistake from the tee to make things 20-0.

The mayhem of Tonga’s scintillating finish to the game made for incredible scenes, but England were able to scrape home in a thriller. 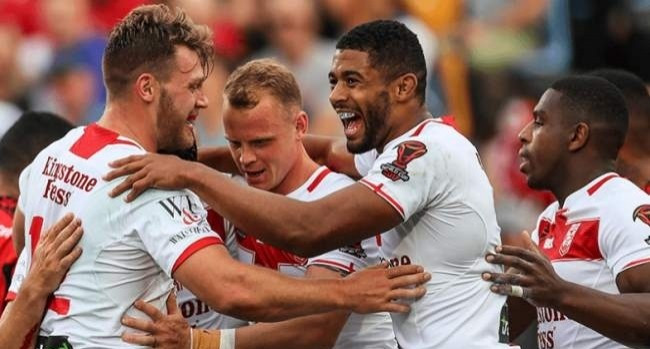