The USA Hawks have warmed up for next month’s Rugby League World Cup by winning the 2017 Americas Championship series.

The US beat Canada 36-18 Saturday night in Toronto. Canada opened proceedings like a sprinter out of the starting blocks to get on the board first, but the USA recovered from the initial setback and were never threatened from that point on.

The Hawks answered the Wolverines’ early strike with two quick tries to get out to a 10-6 lead within the opening quarter of the game. The Hawks increased the margin with their third converted score to make it a 16-6 ballgame late in the first half.

The home team was making life difficult for itself by lacking patience on offense and not maintaining possession. Completing sets was a problem. The half ended without any further additions to the scoreboard, but the second stanza opened with the Americans making yards on almost every carry, putting the Canadian defence under heavy pressure from the get go.

That concentrated pressure saw the Wolverines’ defence crack early as the US went in for their fourth try and a 20-6 lead. Three minutes later and the Hawks dotted down for the fifth time in the game to extend their lead to 24-6 and at that point things began to look very ominous for the home side.

Midway through the second half and the visitors from south of the border had a firm grip on the championship trophy, while Canada was staring down the barrel of a third straight defeat in a month.

The Wolverines looked to be turning the tables and threatened to add to their score following a solid build-up of their own pressure, but despite mounting several waves of attack from inside the Hawks’ red zone, they couldn’t penetrate the Americans’ defensive patterns. Canada looked to have scored when halfback Rhys Jacks darted through a couple of defenders from close range, but spilled the ball over the line.

From the ensuing scrum, the US ran the ball to the other end of the field where they finished off a long passing movement that went from one side to the other to score under the posts. With the successful conversion and with time ticking away, the USA had an unassailable lead of 30-6.

However, the visitors weren’t done yet and their seventh try pushed the buffer out to 36-6.Then finally, and much to the delight of the Lamport Stadium crowd, Canada’s Jack Couzens scored for the Wolverines close to fulltime to bring a little respectability to the scoreline at 36-12. And for good measure, the Wolverines scored their third converted try as the final whistle was about to blow for a final score of 36-18.

“I am extremely happy with the result,” said Hawks coach Sean Rutgerson. “I thought we defended really well and that our game plan was well executed for the most part. This game has put us in a great position to evaluate our strengths and weaknesses heading into the World Cup and the win is a great morale boost for the team.”

Conversely, it’s back to the drawing board for the Canadians who have two more games coming up against police teams from New Zealand and Britain.

“When we’re under pressure we tend to move away from our game plan and we’ve probably got to have an honest discussion with the senior player group about that,” Canada head coach Ben Fleming said after the match.

Wolverines captain Eddie Bilborough said matches against the USA are always intense and this one was no different. “We got a good early jump, but they just kept coming at us,” he said. “They got to the World Cup for a reason in 2017 and they showed us why tonight.” 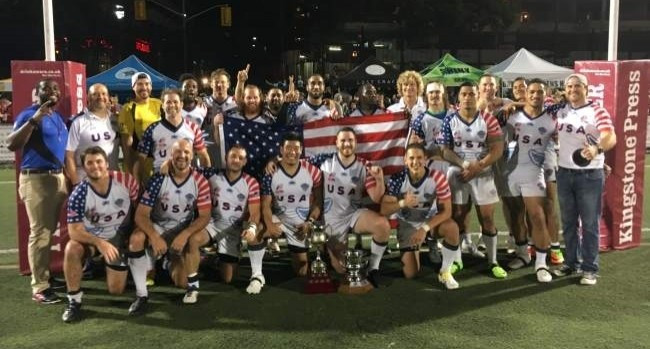