In an outstanding contest, Wales under 16 secured a 32-18 win over Ireland in a scoreline that in the end slightly flattered the home side with the Irish battling right up to the end.

It was four tries all with three minutes to go, but two Welsh tries cemented a hard-fought win. Wales took the lead on 10 minutes when Will Clapham went over in the corner. Lewis Hall converted.

Ireland were close to getting a try back as they pressured the Welsh line. In the final two tackles of a set, Calum O’Neill held up over the line then Aaron Kelly stopped centimetres short, whilst an outstanding full-back style catch from Billy Glover prevented another Ireland chance later in the half.

The Irish also kept the Welsh out. Will Clapham was close to scoring, after good work from Ben Snadden, but was forced into touch when diving for the line. Joel Davies was another who was close to increasing Wales’ lead but he, under pressure, couldn’t catch a pass when near to the line.

Following all that outstanding first half defensive work, it took less than a minute for Wales to increase their lead in the second half, Hall running well to score near to the corner but failing to convert his own try.

Ireland soon hit back when Calum O’Neill made a strong run to score just left of the posts but Josh Thewlis sliced the kick wide. But Wales addressed the balance straight away. Morgan Johns again forced into the corner to score with Hall converting well from the touchline.

Ireland hit back again when Nathan Kiernan went over from dummy half and Thewlis converted to bring the score back to 16-10.Wales again immediately increased their lead when Ewan Badham scored under the sticks and Hall converted.

And once again as soon as Ireland regained possession they scored. Sam Cullen with the try which went unconverted. They got another one back with five minutes to go, Eoin Creaby muscling his way over but again the conversion was missed.

But Wales sealed the win after Iestyn Hopkins scored in the corner. He almost got another wonderful individual score but was stopped in his tracks before Jake Cannon got the final try of the game converted by Hall.

Wales next face Ireland again in Ashbourne on Saturday 26th August before taking on England in Cyncoed on Saturday 2nd September. 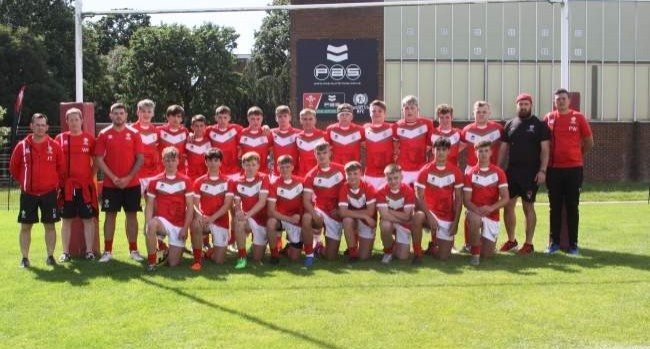