England have secured second spot in Pool-A of RLWC2017 after defeating France 36-6 on a balmy Sunday evening in Perth, Western Australia.

They scored seven tries against a French side who failed to make an impact, and while it will be enough to progress to the quarter-finals, they’ll face a tougher test against their next opponents Papua New Guinea.

England coach Wayne Bennett said pre-game he was simply after a mistake-free performance and one that bettered last week’s win over Lebanon. In the first 40 minutes, that was what his players delivered. But as the game entered the last quarter of the match, England held a comfortable lead, the gas certainly wasn’t kept on the pedal as the errors crept in.

For a major portion of the game, England looked on track to hit the coach’s targets, but they finished with 13 errors and 12 incomplete sets – figures that certainly won’t impress.

Playing at fullback for England for the first time since the 2010 Four Nations, Gareth Widdop scored on his first touch of the ball as he scored a brilliant, hole-running try after three minutes of play. Tries to Stefan Ratchford and James Graham followed as England shot to an early 18-0 lead.

Midway through the first half, a sweeping left-to-right move by England drew France’s defence and space was found on the edge for Mark Percival to score The Lions’ fourth try.

Luke Gale provided a neat try-assist shortly after to centre John Bateman, who did well to surpass France’s defenders to extend the margin to 26-0.

After copping a battering for the majority of the first half, France finally found a way over in the 34th minute through Benjamin Garcia, who split the defence and dived over the try-line.

After walking off at halftime with a scoreboard reading 26-6, Huddersfield Giant’s winger Jermaine McGillvary scored a double in what proved to be the England’s only points of the second half.

France appeared to have scored another try in the 57th minute, but a forward pass was ruled after Lucas Albert ran 60 metres for the try-line.

Holding a 32-6 lead as the game neared the final quarter, England coughed up a  few errors – preventing them from furthering the margin until McGillvary nabbed his second try in the 64th minute.

That’s where the scores would stay, as England proved far too strong and sent France home from this World Cup without a win. 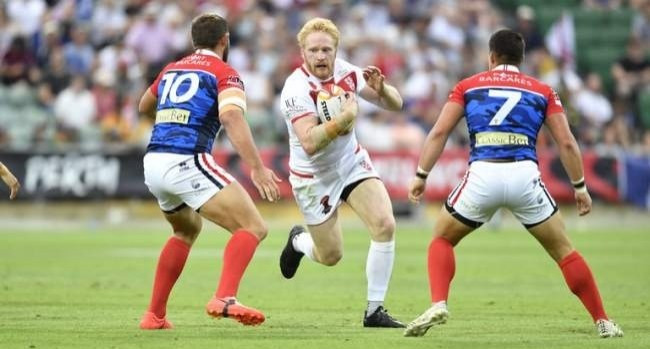