James Tedesco’s switch into the halves helped Italy get their Rugby League World Cup journey back on track with a comprehensive 46-0 shutout of the United States at Townsville Stadium on Sunday.

With Terry Campese a late withdrawal for the second consecutive week and Jack Johns sustaining a broken arm in the opening loss to Ireland, Italy coach Cameron Ciraldo had little option but to move the star fullback to No. 6 and in doing so Tedesco had more time with the ball in his hands. The switch paid lucrative dividends for Italy with Tedesco taking control of the result by scoring two tries and putting in a handy performance to lead the Azzurri to a comfortable victory which will provide a vital dose of confidence heading into next Friday’s must win clash with Fiji in Canberra.

U.S.A coach Brian McDermott would have known that if his side were to match it against Italy, they had to make the most of every chance they had but simple errors in the opening 40 minutes proved costly and allowed Italy to take a commanding 28-0 lead at halftime.

The tone for the match was set when Joe Tramontana scored in just the seventh minute from a kick to winger Josh Mantellato. Italy’s best attacking option in last week’s loss to Ireland was to kick towards the towering Mantellato and in their first offensive play of the match, they looked to him again with immediate dividends.

Leading 6-0, Italy began to look increasingly dangerous and it wasn’t long before the class of Tedesco cut through. A nifty right-foot step close to the Hawks’ line in the 14th minute fooled the defenders and allowed Italy to shoot out to a 12-0 lead.

Both sides made a number of errors throughout the first half, but it was Italy who made the most of the gifted time in possession. Mantellato eventually scored in the 20th minute before providing a try-assist to Ryan Ghietti just moments later, who scored via a stylish short-side move down the left edge.

An exciting chip-and-chase just before halftime looked like USA would be away for their first try, but a second kick was charged down and allowed Italy to press downfield, resulting in Joe Tramontana’s second try.

Tries to Tedesco, Paul Vaughn and Mason Cerruto in the second half ensured the gap was put well-beyond the Hawks’ grasp and the victory would be one that would restore Italy’s hopes of progressing into the quarter-finals. 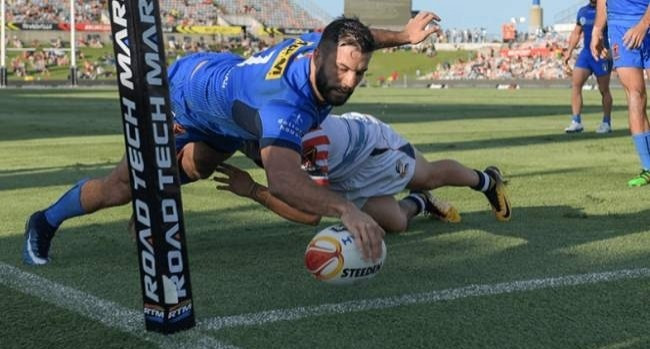