Scotland made history in west Cumbria as they became the first of the minnows to claim a Four Nations point after snatching a deserved 18-18 from a dramatic match with New Zealand at a wet and windy Derwent Park.

Skipper Danny Brough kicked the all important goal to convert Euan Aitken's first try for Scotland two minutes from the end to claim a share of the spoils with the Four Nations holders on the night he equalled Andrew Henderson's record for most caps.

Glorious in defeat by England in Coventry last Saturday, a draw was the least Scotland deserved after out-playing the Kiwis for long periods as they maintained their unbeaten record at Workington, where they have now secured two wins and two draws from four matches at their second home.

It was a performance of true grit and determination from the Bravehearts on the night their football counterparts were soundly beaten by England at Wembley. Brough needed a pain-killing injection before kick-off to combat a knee injury win his 23rd cap and he lost his half-back partner Danny Addy for a concussion assessment after 11 minutes but the Scots were full of energy from the start.

They were helped by an early run of four penalties which enabled them to play the first quarter of the match in their opponents' half and it was against the run of play when the Kiwis took the lead on 23 minutes, right winger David Fusitu'a taking an offload from second rower Tohu Harris to score a try on his debut.

Issac Luke's conversion made it 6-0 but Scotland struck back just three minutes later when Wigan winger Lewis Tierney produced a finish which his father Jason Robinson would have been proud to score. Full-back Lachlan Coote's grubber kick looked to be too strong but Tierney never gave up the chase and skirted the touchline as he gathered to touch down for his first try for his country.

Brough was unable to add the goal but, trailing 6-4 at the break and with the wind and rain at their backs in the second half, the prospects looked good for both Scotland and England. The skipper quickly made use of the elements with a 40-20 inside the first minute of the second half and Addy, back in action from his concussion assessment, was literally thrown back from the line as Scotland threatened to take the lead.

The turning point appeared to come on 50 minutes when Brough's attacking kick went straight into the hands of Fusitu'a, who turned defence into attack with a dart upfield. Within the next set, the big winger got on the end of a sublime pass from Shaun Johnson to cross for his second try that extended his side's lead to 10-4.

However, New Zealand suffered a blow when stand-off Thomas Leuluai went off on 57 minutes with a facial injury and their fortunes went from bad to worse in the space of four minutes. Coote released Tierney down the right flank and second rower Ben Hellewell, who was on his inside, took the final pass to dummy his way over for a glorious try.

Brough's first conversion tied the scores and Scotland were in dreamland three minutes when later he put his side in front with a 35-metre penalty.

The dream looked to have been dashed inside three minutes, as the Kiwis quickly re-grouped and centre Gerard Beale went over for two tries in three minutes, largely through the sublime handling skills of Johnson.

However, Luke was unable to master the swirling wind to leave just a six-point margin and that was enough for the never-say-die Scots who struck back with arguably the best try of the match and Brough did the rest. 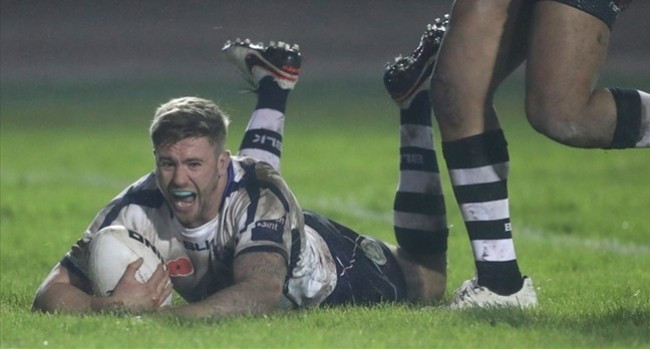