“It’s really pleasing, if you are going to achieve things it’s got to be difficult but the collective spirit, desire and passion was there for all to see,” said victorious Wales coach John Kear as his side qualified for the 2017 World Cup after beating Italy 20-14, in a tense thriller at the Stadio Brianteo in Monza.

Kear, who led England in the 2000 World Cup and has also taken charge of France added: “We’ve had a lot of adversity over the qualifiers, we’ve had to bring new players in because of injuries and lost a half-back so had to reshuffle, as well as losing Rhodri Lloyd to a hamstring injury here early on, but we showed a collective will to get the job done and finished the stronger.

“At 14-6 down going into half time we needed something and Anthony Walker came up with a special play. People like Matty Fozard have come of age in these games and I’ve been delighted to see how much he’s improved, and Phil Joseph was a giant in the middle.”

Wales debutant Danny Ansell came off the bench to play a prominent part but Kear was at pains to share the praise. “We refocussed on how we had success and defended well, that’s the basis of how we’ve triumphed here. We’ll now monitor everyone who is available to play for Wales but this bunch who’ve rolled their sleeves up and got their elbows and knees dirty are already on the front foot.”

“I’m so pleased in the manner in which we’ve qualified. Some of the players felt that they didn’t do themselves justice in the 2013 World Cup and are looking at putting that right.”

Young St Helens centre Ben Morris, who made his debut for the Welsh the week before in the international with Jamaica made a big impression, crossing for the opening try in the 15th minute after Fozard had broken clear and positioned him to the posts with an inside pass, Courtney Davies goaling.

Lloyd White’s kicks caused problems but Italy enjoyed most of the possession for the next 10 minutes and on a third repeat set from consecutive drop outs, Colin Wilkie jinked onto a pass to score, Terry Campese levelling with the conversion.

Straight after, a fumbled kick by the visitors saw winger Justin Castellaro go over in the corner, Campese nailing the conversion and then a penalty, after he was hit late by Gil Dudson on 37th minutes.

Wales hit back immediately, Walker picking up the ball from the back of a scrum 20 metres out and crashing over, Davies wide with the goal attempt to leave it 14-10 at the break.

Wales were ahead 12 minutes after the break, Italy fumbling a White kick and Fozard swooping to send Andrew Gay in to score, Davies edging them ahead with a terrific touchline conversion.

And, just before the hour, on the back of Craig Kopczak’s break, Fozard was again the provider with a popped pass for Morris’ second, Davies wide with the extras.

From there it became a tough, physical battle, Joe Burke suffering a badly broken nose but Wales held on, their travelling band of 200 fans getting louder as victory grew nearer.

The Italians, who put on a day-long festival of rugby league including their ‘A’ team going down 26-16 to Belgium in the curtain-raiser, were kept scoreless in the second half and ran out of attacking ideas in the closing stages, having twice dropped the ball in the corner.

Ansell nearly uncovered Wales’ record try scorer Rhys Williams with a kick to the corner, and he wide with a drop goal attempt five minutes from time but the determined Welsh hung on.

“It’s pretty disappointing but I thought that Wales were the better team,” said Italy head coach Cameron Ciraldo. “They had a lot more energy than us but we are going to have to go the hard way now if we want to make the final World Cup place.

“We’ve got to fix up a few areas in our game that we didn’t execute very well but they were all very brave. We had a gastro virus that ran through the camp all week and some guys lost four or five kilos and we didn’t know if they would be able to play, but they put their hands up.” 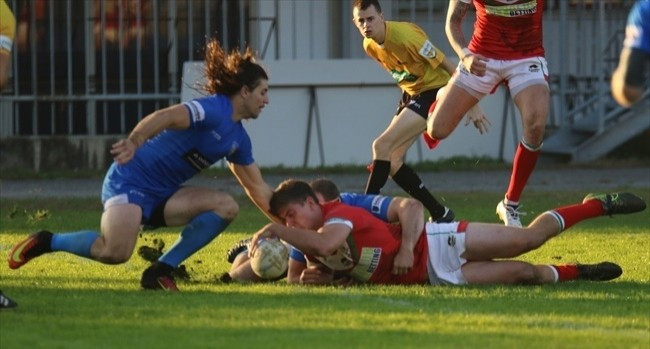