In a pre-cursor to the Wheelchair European Championships which start this evening, England won the inaugural Kielty/Fassolite Trophy as they defeated World Champions France in Gillingham.

After a tight first half, England led 26-14 thanks to tries from Wayne Boardman - set up by local hero Joe Coyd - Sebastien Bechara with his debut score for his country, Jack and Harry Brown; Jack Brown kicking a penalty.

France responded through Mikael Gaune with two tries and they narrowed the gap further when Cyril Torres landed a penalty for offside on the hooter.

In the second half, Harry and Jack Brown both completed their hat-tricks, Martin Lane and Boardman with a second - from a great pass by Bechara - also crossing, to take the hosts past the half-century mark.

With fifteen minutes to go, France staged a mini comeback when Christophe Cochand and Nicolas Clausells went in for scores. 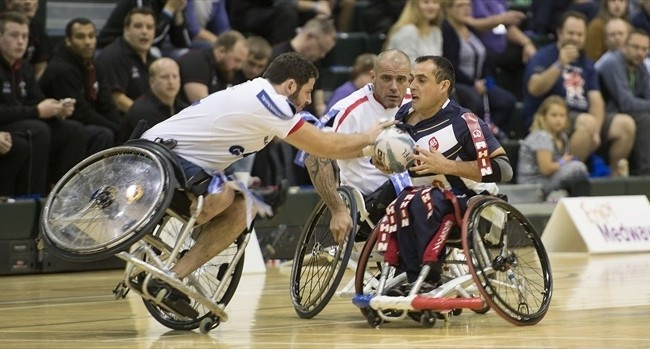