Spain suffered defeat for the first time against Germany after wilting in the summer sun on Saturday afternoon. Played in Valencia under an energy-sapping 35 degree sun, a well contested match saw Germany take a decisive lead on the hour mark, through front row Sebastian Roczyn, and then seal the victory seven minutes later thanks to a try by man of the match Mitch Evers, playing his first game for Germany.

Spain were stronger early on and scored first, with left wing Hadriel Mehamed the beneficiary after Joaquim Fraile’s break. Germany hit back a minute later through debutant wing Vivien Seelweger but then front row Luis Thorp crashed through two German defenders to restore the lead which, once again, lasted barely a minute, with German full back Mawuli Amefia going over. Six minutes before the break Germany took a lead they would not relinquish as centre Nick Keinhorst scored, his brother kicking his second goal.

Two minutes after the break Germany scored again, through the influential Keinhorst, enjoying his last outing in the black shirt, but Spain, eager to retain their unbeaten record in front of around 300 fans, hit back through an individual try by Ezequiel Pérez-Fuster. That was the high point of their fightback, as Keinhorst and Evers competently steered his team to secure the victory, to the satisfaction of co-coach Bob Doughton.

"Simon Cooper (co-coach) and I are very pleased with the result. We had no idea what to expect from Spain and we were missing four regular players. We had seven new players in the squad and it was very pleasing to see how the team grew together with Andy Hoggins leading by example. We have a bunch of things to work on before our Griffin Cup match against Holland on 20 June on but it is another step forwards in our development." 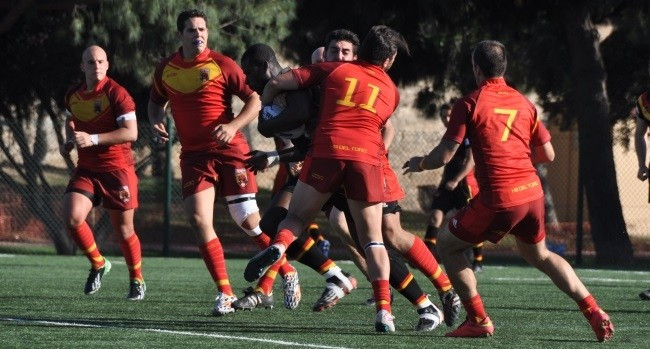