A man of the match performance from Warrington’s young full back James Saltonstall saw Italy retain faint hopes of winning the 2012-3 European Shield, with a 66-30 win over holders Germany in 36 degree heat in Karlsruhe.

The Azzurri moved to within two points of Russia in the table with the 12-try performance but if the Russians beat Germany at home on 10th August, they will be crowned champions and Germany relegated to the European Bowl. Should the Germans pull off a shock win, then the Italians could still claim the crown if they defeat Serbia at home in October, which would possibly see the Serbs demoted.

The sharp and well organised Italians dominated the play the ball area with Gloucestershire All Golds stand off Matthew Bradley – who finished with 16 points - profiting from some quality ball from Hemel’s Joel Miranda which saw him spread it wide to great effect; Oldham winger Richard Lepori finishing with three tries.

“Our aim was to come up with three wins in the competition in the reverse fixtures this year and we are on target,” said Italy assistant and Piacenza coach Kelly Rollaston. “I’m pleased with how the newcomers fitted in; James Saltonstall was calm and class at the back and Matt Bradley ran the game. It was a great effort which showed how the domestic game in Italy is progressing.”

The Germans, on the back of four early penalties, took a shock lead who Oxford hooker Andy Hoggins burrowed over but from there the Italians dominated the first half, establishing a 38-8 advantage; their best try claimed by Ivan Barani following mesmerising handling from a scrum play.

As the heat took its toll, the Germans made a commendable fight of the second period which pleased their coach Dan Stocks. “I was proud of the guys and I couldn’t fault their determination,” he said. “They showed a lot of heart and were Italy’s equal after the break. It comes down to a lack of experience at this level and some naivety in conceding the early tries.” 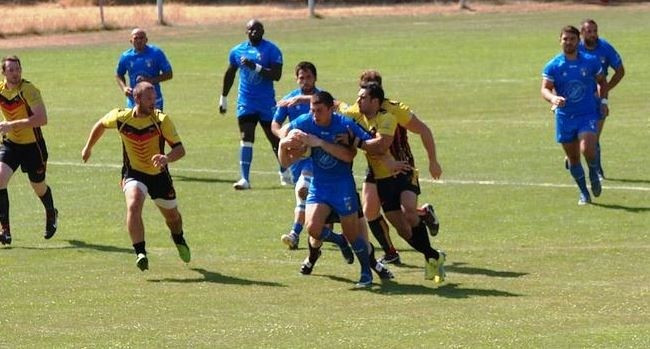