The Cedars wrapped up their tour of Morocco with another impressive display, dismantling the hosts 78-0 to retain the MENA Championship. Stand-off Walid Yassine [pictured] broke Lebanon’s points-in-a-game record following his 11 goals and four try display. The 38-point haul was four-points better than Samer El Masri’s 15 goals and a try, registered against Serbia in the 2003 Mediterranean Cup.

Score-line notwithstanding, it was a stronger display from the home team, which made six changes from the first match, with the sin-binning of Lebanon’s Ghassan Dandach and Morocco XIII’s Mohamed Boukaira testimony to the physical edge on show.

Morocco XIII coach, Abed Wahed Souguini, a rugby league veteran who played in the 1995 Emerging Nations World Cup, was clear that Moroccan rugby league had a lot of improvement in it: “we played much better than the first game. We need to work on our techniques and have a better understanding of game-play. Hopefully next season with the aid of MENA Region [of the RLEF] working closely with our organisation we will have a stronger team.”

Despite breaking Lebanon’s line on several occasions, a much more aggressive Morocco XIII were unable to convert their chances into points, and trailed by 46-0 at the break. The Hachache brothers both scored hat-tricks while man-of-the-tour Yassine and his halfback partner Ali Kaarali pulled the strings in midfield.

Lebanon interim coach Thierry Dumaine was happy with his side’s application of their tactics: “we always played as a team and despite a few mistakes with the ball we never game Morocco a hope of scoring.  From a coaching perpsective, I’m very satisfied with how we played; we secured a second win and the trophy. It’s been a great two weeks with all the players and staff and I hope to maintain my relationship with Lebanon until the world cup.” 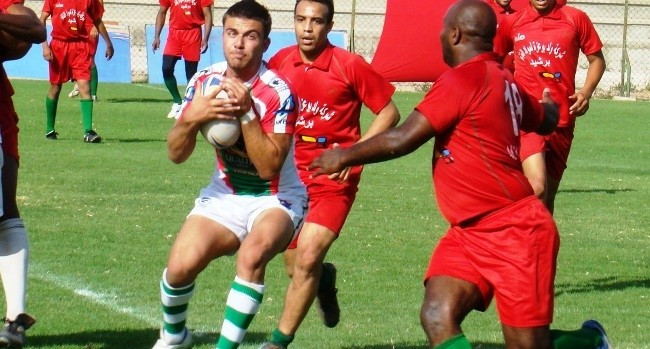