2008 RLWC PRELIMINARY QUALIFIER
A last minute try from full back Rudy Stanford-Smyth secured victory and third place in the final table for the Netherlands in a thriller in Rotterdam. The men in Orange, coached for the first time by Hemel's Troy Perkins, built a 20 point half time lead but were pegged back after the break by the spirited Serbs.

The Dutch got the perfect start when hard working back rower Raijmond Den Engelsman proved unstoppable on one of his frequent charges, skipper Aaron de Jager converting. A Dalibor Vukanovic penalty got the visitors on the board in the seventh minute but both sides were reduced to twelve men soon after when former Halifax centre Dayne Nierinckx and Dorcol Spider Jovan Vujosevic were sin binned.

The visitors levelled in the 18th minute when agile winger Nenad Grbic outpaced the cover to go in at the corner. The second quarter belonged to the Dutch who posted four fine tries, the first from strong running Vincent Grimbergen. A great break from loose forward Duncan Taylor set up Stanford-Smyth by the posts for his first score, de Jager converting and Nierinckx showed his strength and experience to power over. Taylor gained due reward for his sterling efforts with a well deserved touchdown just before the break, de Jager's conversion making it 26-6.

The Serbians staged a superb fight back in the second half, drawing to within four points with three tries in 15 minutes after the break. Debutant James Simeunovic from Siddal got them back on track and busy hooker Zoran Pesic coming off the bench to cross twice in six minutes to make it 26-22, his second arriving despite the visitors being down a man after Nemanja Popsogorovic had been sin binned for deliberate offside.

Never-say-die Den Engelsman extended the Dutch lead when he followed up a kick but Grbic set up a grandstand finish when he grabbed his second score in the 77th minute, Vukanovic's kick coming back off the posts to leave the gap at six points. A blindside power play in virtually the last attack secured victory when Stanford-Smyth linked for his second and the decisive score. 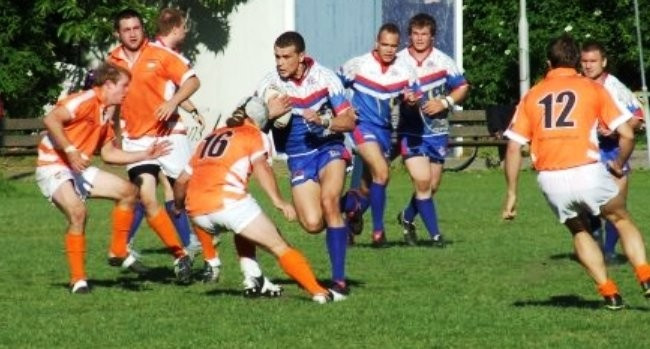