Ireland booked their place in the 2008 World Cup in Australia by the most slender of margins after forcing a 16-16 draw with Lebanon in their final European qualifying group one match.  Lebanon, who were forced to play their home tie at Dewsbury because of the volatile situation in the Middle East, had fought back from 12-4 down at half-time to lead 16-14 with four minutes left.  But substitute Chris Bridge rescued a draw with his second penalty of the match which enabled the Irish to top the group on points difference.  It was the second draw between the two teams but Lebanon were left to rue their failure to post enough points against Russia.  However, the Lebanese will have a chance to claim the 10th place in Australia by entering the repechage.

Ireland set the tone for a bruising encounter in the very first minute when prop Ray Moujalli was rocked back by a crunching double tackle from Mick Cassidy and Eamon O'Carroll, freeing up possession from which scrum-half Liam Finn scored the first try, tapping the ball ahead and getting the vital touch. Scrum-half George Ndaira, Lebanon's best player by some distance, jinked his way over for a try but the Irish extended their lead on 19 minutes when stand-off Paul Handforth followed up a kick from impressive centre Sean Gleeson.

Both sides had tries disallowed, with Ireland second rower Jed Corcoran brought back for a forward pass while Lebanon centre Hassan Saleh was denied by offside. Finn converted both Ireland's tries to give his side a 12-4 interval lead but the gap was down to just two points when experienced loose forward Chris Salem forced his way over from close range eight minutes into the second half.

Lebanon consistently let themselves down with their lack of discipline and they were reduced to 12 men on 61 minutes when prop Charlie Nohra was sin-binned for the latest in a series of high tackles. Another penalty gave substitute Chris Bridge the opportunity to kick Ireland into a 14-10 lead but when full-back Scott Grix marred an otherwise faultless display by fumbling a high kick from Anthony Farah to present centre Frank Samia with an easy try.  That levelled the scores and full-back Toufic Nicholas' second conversion put Lebanon in front for the first time.

The game looked to have slipped away from Ireland but Salem produced an untimely high tackle on Bridge and the Warrington stand-off got up to kick the crucial goal. Ireland coach Andy Kelly spoke of his proudest moment after masterminding his team's successful qualification for the 2008 World Cup. The final whistle sparked wild scenes of celebration as Ireland joined previous qualifiers Tonga and Fiji alongside automatic entries England, Australia, New Zealand, France and Papua New Guinea in the main draw of the World Cup.

"I've been involved with the Irish coaching set-up since 2000 and qualifying for the World Cup sits amongst the highest honours I've ever achieved in the game," said Kelly. "I'm immensely proud of what we've done and what we've achieved and I hope we can push on now. In terms of the game in Ireland, it's a massive step and gives us something to focus on in the year to come."

Lebanon, who conceded a last-minute try in an 18-18 draw in their first meeting with Ireland in Dublin a year ago, will have another chance to qualify through the repechage but may have to overcome a strong-looking Samoa.  "The difference in emotions at the end showed how much both sides wanted to avoid the repechage because there are some good sides in there," admitted Kelly.

Lebanon, whose team is largely Australian-based, will now have to cancel Sunday's return flight to Sydney to prepare for Friday's repechage semi-final against Wales or Scotland.  Team manager Anthony Elias said many of the players, the majority of whom were part-time professionals, would struggle to get the extra time off from work.  "It's a very solemn dressing room," said Elias. "The boys have taken it quite hard and it's going to be a challenge to re-motivate them and get them up for next week's game. It's pretty hard to take when you score three tries to two and have one disallowed which I thought was a fair try and concede two very soft penalty goals to get a draw. And the two tries they scored have got to be the worst two I've seen in internationals, ricochets and rebounds, it was luck of the Irish I suppose. That's two draws we've had in a row with Ireland and they get through." 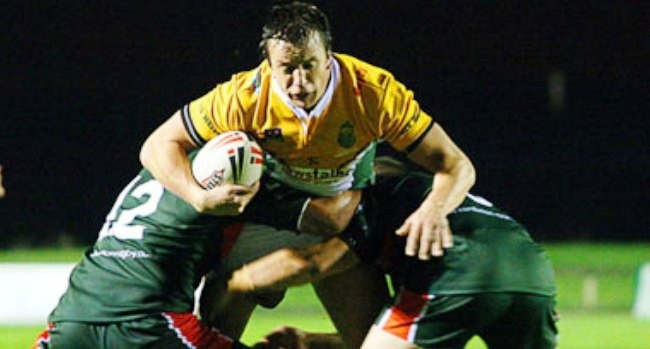