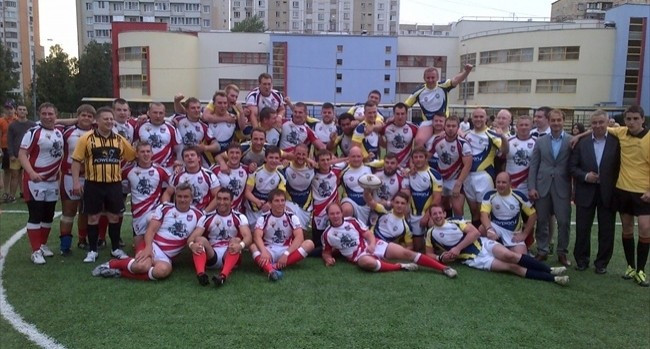 The Midlands Lionhearts, representing Rugby League teams in the Midlands region of England, have returned from a two match tour of Russia.

The team experienced mixed fortunes on the field, with a 36-16 victory over a Moscow City Select XIII side at the Red Arrow Stadium in Moscow on Friday 6th June before falling to a Russia Select XIII team in the Rugby League hotbed town of Vereya on Sunday the 8th June.

The tour was organised to allow players from the Midlands, who funded the tour themselves, to have the opportunity to play on the international stage whilst at the same time giving Russia Rugby League the opportunity to give its representative sides additional game time ahead of their European “B” Championship campaign.

Despite mixed fortunes on the field, the 22 man touring party won the hearts of minds of both their opposition and the locals, which saw them deliver a coaching masterclass to local school children, attend a major musical festival as guests of the promoter and visiting some of Moscow’s most historic sites including the Kremlin, Red Square and St Basil’s Catherdral.

In the opening match, the Midlands came out on top in a physical game thanks to a hat trick from loose forward Greg Pearson. In the searing heat, Moscow took an early 4-0 lead but the Midlands fought back to lead 14-8 at half time thanks to tries from Pearson, Clive Jackson and Matt Dudley with Danny Bancroft adding a single conversion.

The second half saw an early burst of 3 tries in 10 minutes from the Midlands which put the game out of Moscow’s reach. Greg Pearson scored two of these, completing his hat trick, and Matt Dudley scored his second with Danny Bancroft converting the two Greg Pearson tries.

The final half hour of the game was evenly matched with Moscow grabbing two tries either side of a 50 meter solo effort by Adam Clifford, which was fittingly converted by Frank Barlow to celebrate his 21st birthday and bring the score to 36-16.

In the second match, the Lionhearts ran out steam against a strong, well drilled Russian national side. The match took place in Vereya, a Rugby League hotbed south west of Moscow.

After conceding early Midlands took a 10-4 lead with tries from Andrew Burton and Clive Jackson with Frank Barlow converting the second of these tries.  Russia fought back though to lead 20-10 at half time with 3 further tries.

The early stages of the second half saw both teams exchange tries, the Midlands’ score coming from Adam Clifford with Danny Bancroft adding the extras. As the Midlands team tired, the final minutes became one-way traffic and Russians added a further six tries to run out comfortable winners. Prop Denham Samuels worked tirelessly for the Midlands and was awarded the Midlands man of the match.

“The Midlands players should take pride in competing against a strong Russian national side for over fifty minutes” said Chris Spurr, Tour Manager. “The players were a credit to themselves and to their clubs throughout the entire tour and should be pleased with their efforts. The experience for everyone has been fantastic and I am sure that it will be something that will remain with the players for some time to come. All the players and coaches would like to thank Russia Rugby League for great hosts and very welcoming during our stay.”