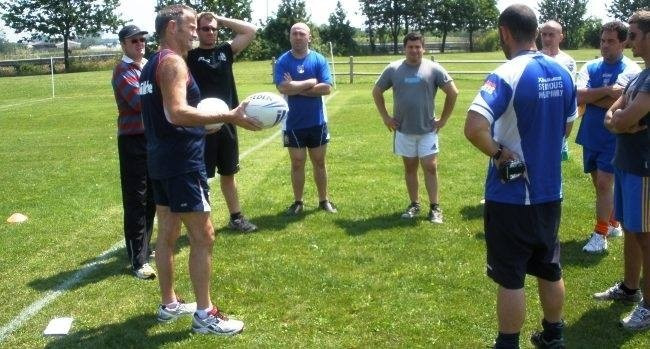 A further milestone in European rugby league development has been reached with the first level 2 match official and coaching candidates receiving their qualifications under the new RLEF technical education system, launched in March 2016.

Steve Hogan, the head of Rugby League Ireland’s match officials department, became the first RLEF level 2 match official, whilst leading candidates in Spain, Greece and Wales are on the verge of completing their qualification. Their counterparts in the Czech Republic and Italy will use their 2017 seasons to complete their professional development tasks.

On the coaching side, Ireland’s Mike Aughey and Norway’s Dave Hunter are the first to graduate, with other coaches in Wales, Greece and the Czech Republic nearing qualification.

RLEF Coaching Manager Martin Crick said: “The RLEF Level 2 coaching award was launched in Leeds with a four-day camp for coach educators and coaches. Since then attendees have been working towards the qualification by completing a series of assessment tasks around session planning, game preparation and review, and finally a self-review of their own coaching. I would like to congratulate Mike and Dave for being the first over the line. This is an historic moment which will further develop coaching standards in our member countries.”

The Level 2 courses will begin their roll-out throughout Europe this summer, with eight scheduled from June to September in the Czech Republic, Italy, Serbia and Wales, with France and Ukraine due to hold courses in 2018. The best Level 2 practitioners will be selected for additional professional placement training in 2018 as the RLEF continues to cultivate its development pathway.

“RLEF Education’s new system is a fundamental part of our mission to foster authentic rugby league programmes throughout Europe using standardised methodology,” said RLEF General Manager Danny Kazandjian. “It’s encouraging to see locally trained leaders starting to implement this system, creating a development pathway and, most importantly, introducing a quality control threshold for every single participant. We can now monitor the quality of work that’s being done in the field for the first time, thereby ensuring that the rugby league being delivered by our members is of a high standard.”

RLEF Education is working on accreditation of its suite of 10 qualifications – Level 1, Level 2, Level 1 Educator, Level 2 Educator and Tutor, for each technical strand – on the European Qualifications Framework.

The signature technical portal is now fully functional in English, French and Russian, with elements of it available in Serbian and Spanish.